Hiya! Long time, no blog. How is it already the middle of March?! I remember while living in Wisconsin February always felt like the longest month ever because it’s usually the worst month of winter.

For whatever reason, this February flew by! Hence no blog updates.

Let’s quickly run down what happened in February, and then we’ll get to the most exciting part: Our trip to New Orleans!

Whew, looks like we were kind of busy now that I look back. We also had Wisconsin friends come visit, but I’ll leave that as a separate post because we did so much!

Alright, now that that’s out of the way, let’s get to the goods of this post: New Orleans!

With being able to work from pretty much anywhere (a GREAT bonus), I was able to accompany Ryan on one of his work trips to New Orleans.

Ryan travels quite a bit for work, but most times it’s to visit customers. That type of trip wouldn’t make sense for me to go on, because well…I don’t really have a desire to go to middle of nowhere Texas to hang in a hotel room. Plus, we have to pay for Murphy to be watched.

But this trip, he was going for a conference with several other co-workers so I tagged along!

We left early on a Monday morning. We decided to drive because we didn’t want to pay for a flight for me. Plus, we hadn’t road tripped together in a while! I worked on some projects during the drive. 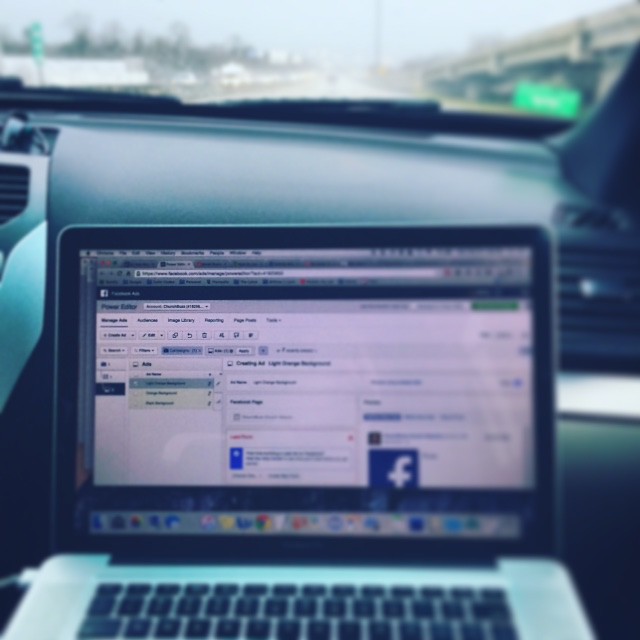 Unfortunately, it rained basically the entire time. Story of our lives driving together. An 8 hour drive stinks a whole lot more when it’s raining.

Either way we powered through and made it around dinner time. We checked into our hotel, which was the Bourbon Orleans hotel which was right off Bourbon St.

Then we headed to a place everyone suggested: Pat O’ Briens!

Pat O’Briens is a where the famous “Hurricane” drink began, which is essentially a really strong rum drink. We of course had to order one, but I ended up not being able to drink much of mine. Too sweet and TOO strong. 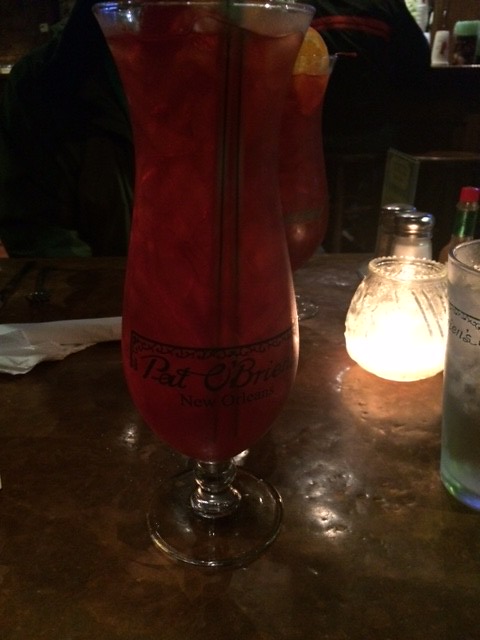 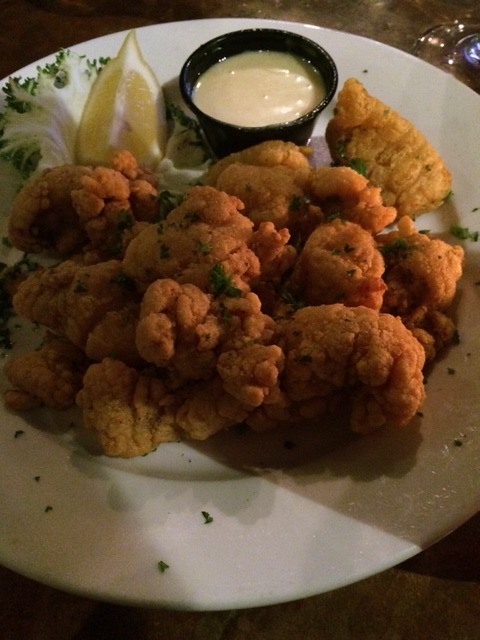 We started dinner with fried alligator because…when in Louisiana? Ha. It was okay, though I’m not sure I would order it again. Too chewy for my taste. 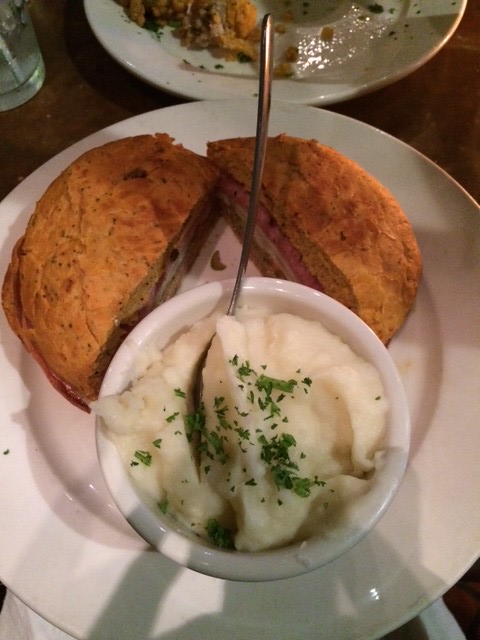 For dinner, I ordered a Muffaletta because omg I love olives. Ryan doesn’t like olives so I try to get my fix when we go out to eat.

Ryan ordered the crawfish etouffe, which was okay but he said he probably wouldn’t get again. I’m not sure we are crawfish people.

After dinner, we went to a place called the Cat’s Meow which is known as “the best karaoke bar in the world.” We were there for the people watching mostly. The Keller Williams Realty group was also having a conference in town and those middle aged woman LOVE their karaoke.

Tuesday we woke up early so we could go to the best place in the French Quarter: Cafe du Monde. Also known as THE place to get beignets.

If you’re ever visiting New Orleans, my advice is to go early in the morning for beignets. We sat outside and didn’t have to wait at all! We went around 8am. 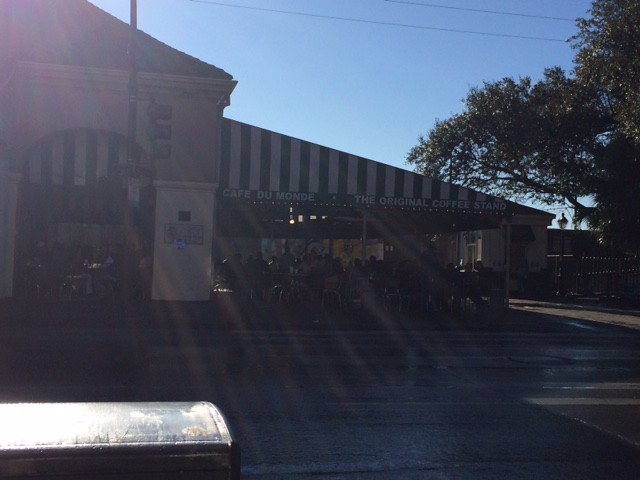 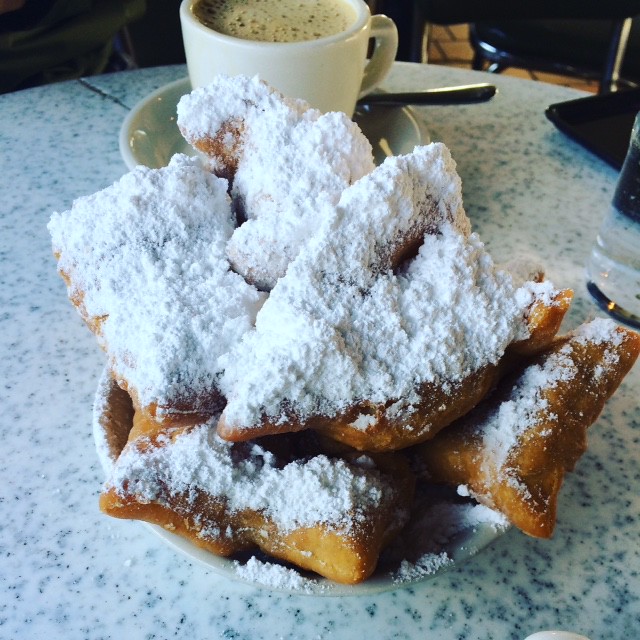 Can these be delivered to me right now? Kthanks.

After we were done stuffing our faces with delicious beignets, did some work, and then went to the convention center where the conference was being held.

I did more work in the lobby area and then we walked around the convention. 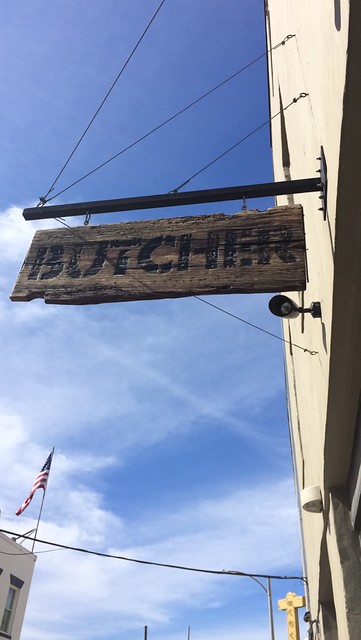 For lunch, my uncle had recommended Cochon Butcher for delicious sandwiches. 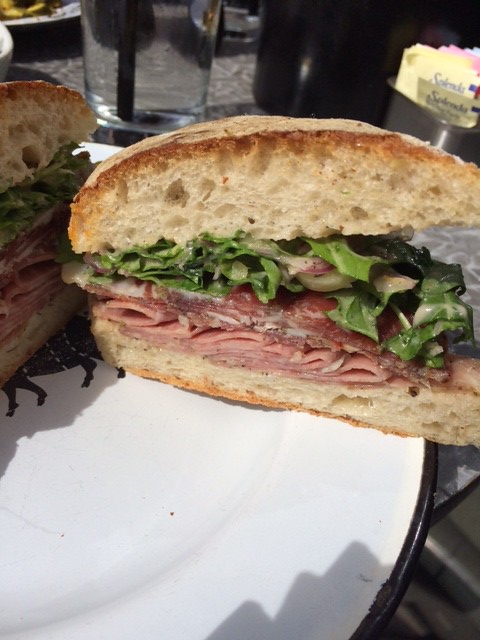 I ordered the Gambino sandwich and the house made chips, which were both so delicious. They have a location in Nashville too, so maybe we’ll hit it up again when we go to Nashville next month!

By this time, we had learned that it’s basically impossible to find a vegetable in the French Quarter. My body was yelling at me for some type of veggie so I looked up a juice place nearby and we walked there. 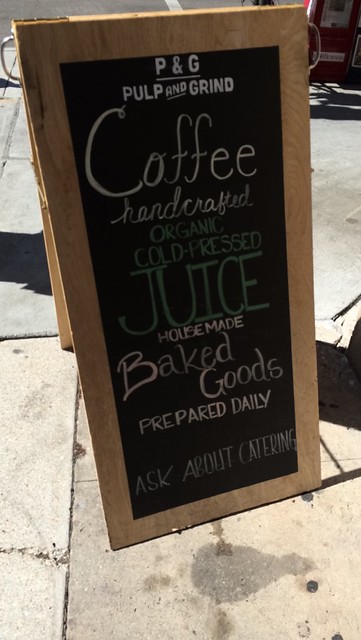 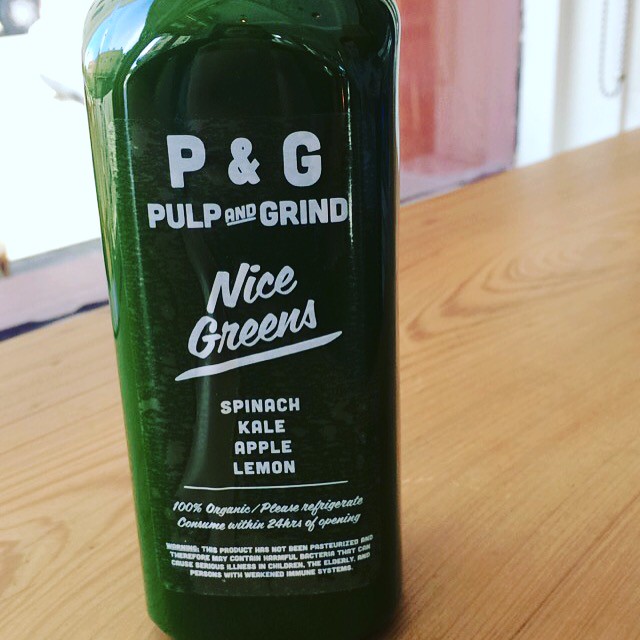 We stopped at the Pulp and Grind and it was a great little coffee and juice shop. Apparently that juice was just what I needed because I was so energetic after! We went back to the hotel and Ryan napped while I was buzzing off the juice and finishing up some work for the day.

For dinner, we got dressed up and met up with several of Ryan’s coworkers along with some distributors his company works with. We had an entire room to ourselves at Muriel’s and the meal was delicious.

We headed back to the hotel around 9:30 and while the guys went out, I decided to stay back at the hotel and read. I can’t handle two nights out anymore!

The next morning, we woke up and hit the ground walking again. Stanley’s was a short walk away and it had pretty good ratings on Yelp. One thing I noticed about looking up any restaurant on Yelp was that nearly every restaurant had at least 4 stars, most having 4.5 or 5! I suppose you have to be a really good restaurant to stay in the French Quarter. 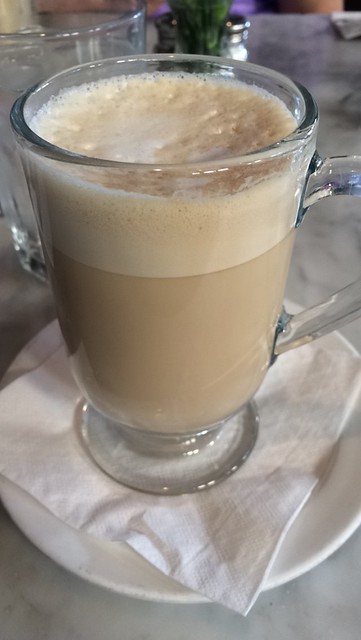 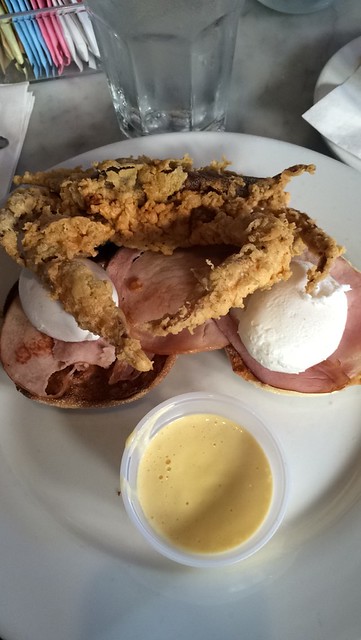 I ordered a latte and the Eggs Stella, which was soft-shell crab and the other usual eggs benedict ingredients. It was only okay, but I think it’s because I discovered I don’t like soft shell crab.

After breakfast, Ryan, his co-worker, and I walked all up and down Royal street, popping into different shops and markets. 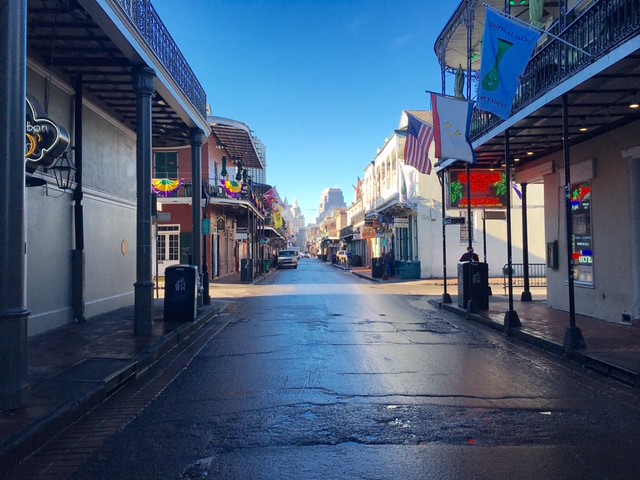 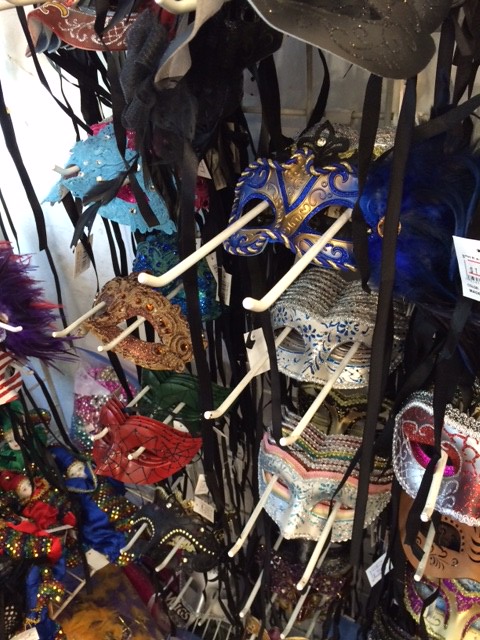 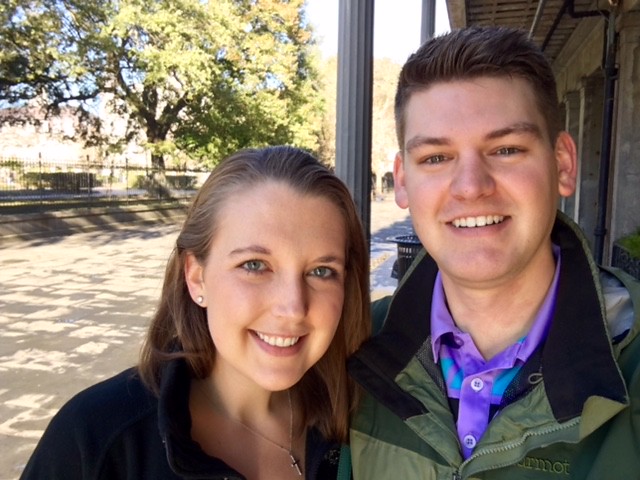 For lunch, (gosh it seems like all we did was eat! ha) we decided to walk to Mother’s. Mother’s is the place to get po’boys and sandwiches and was highly recommended from various people.

Ryan and I each split a roast beef and shrimp po’boy. I think the roast beef was actually my favorite!

We ended up getting iced coffees from Spitfire (SO GOOD) and watched a street band. The po’boy basically put me in a coma so I needed a nap after that! 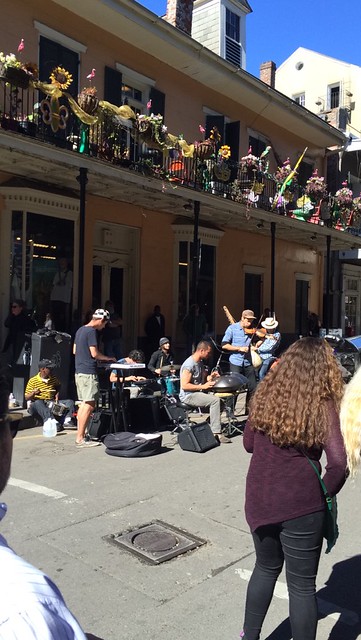 We rallied later in the evening and had a drink at Saints & Sinners, which is Channing Tatum’s bar on Bourbon St. Apparently we didn’t get to experience it to the fullest because they only have the go-go dancers on the weekends.

We both were feeling kind of sluggish and rich food was not sounding good at all. We ended up at a somewhat sketchy greasy diner for dinner. Ryan got some scrambled eggs and I got a BLT. We learned that Beyonce’s sister apparently lived down the street, though I somewhat doubt because this was not a part of town she would live in.

We walked back to the hotel and met with Ryan’s co-worker for drinks at the hotel bar, which had a live band playing.

We called it a night early because we were all feeling exhausted. I can’t keep up with New Orleans!

On our last day, I had to get Spitfire coffee again because it was so good the day before. We even ended up buying some of their coffee beans to take home with us.

All in all it was a great trip and I’m so thankful to be able to take my work on the road.